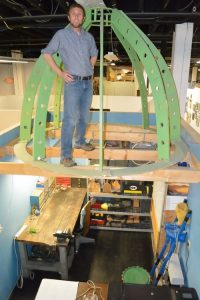 Dan Staudt with his creation at the Idea Foundry.

March is here; ushering in St. Patrick’s Day, Daylight Savings and the 5-year anniversary of this month’s spotlighted team engineer, Dan Staudt.   Dan graduated with a degree in Mechanical Engineering from Cedarville University.  Since joining Kramer Engineers in 2013, he has developed a loyal following of Architects and Developers across the City.

If you’ve turned on the faucet, switched on lights, or felt the warm wash of air during these cold winter months in any number of Columbus’ landmark buildings, you are experiencing Dan’s design handiwork.  From the Civic Center and Leveque Tower to Easton Town Center, Dan has engineered the MEP (mechanical, electrical, plumbing) systems that make the buildings tick.

But if you think that a full-time engineering gig is enough to keep Dan Staudt busy…you’d be wrong.  When he’s not redesigning mission critical systems, you can find him sharing his technical knowledge with those at the Idea Foundry at his design studio.  Oh, but that’s not all; in addition to broadening minds, Dan also wears the following hats:

Danis one of the members of Kramer Engineers’ talent pool.  Our firm is built around a team of professionals who consistently turn out their best work. Because their goal is to develop lasting client partnerships, they make sure to get it right the first time. And it is because of that mindset, that the team can solve even the most complex project challenges; and provide well thought out and cost-effective solutions.