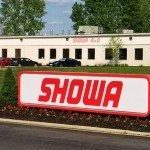 Showa cleanroom construction has begun. The ISO Class 8 (class 100,000) cleanroom designed by Kramer Engineers, is well under way at Showa AM at 707 W Cherry Street in Sunbury Ohio.

What is a Manufacturing Cleanroom

What does this mean?  Well, generally in manufacturing, a cleanroom is a controlled environment that limits the level of stuff in the air; like dust, airborne particles, and pollutants the naked eye can not see.  These bits and pieces can interfere with production. So, systems are created to control and clean air going in and out of the space.  In this case, the new cleanroom will house assembly production lines for Showa American who makes parts used in the automotive industry.

Therefore, construction is underway to prep the space. The 7700 SF panel system is up and ductwork installation is ongoing. Although the building is climate controlled, we have equipped the room with an added level of air treatment; a new custom DX cooling gas heat roof mounted air handler with HEPA filters to screen the pollutants. Although the project is scheduled to complete in the fall of 2016; future phases of similar size and scope are now being planned.