CCI SHOWER RENOVATION OUT FOR BID 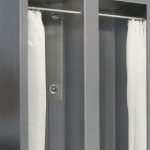 The project involves the shower renovation in 11 residential cell blocks of a 2700 inmate prison, following PREA guidelines.  PREA was enacted by Congress back in 2003.  It stands for the Prison Rape Elimination Act; and it was passed to address sexual abuse.  So, you have to consider distance and sight lines when designing prison showers.  That goes for the general prison cell blocks as well as death row.

Because the new stainless steel I-CON showers are a large departure from what is there now. The existing showers will be demolished to make way for the new design.  That means re-doing the piping, rewiring and reworking the bathroom HVAC as well. So the CCI shower renovation that is now out for bid will be a large scale project.

Contractors to Attend the Pre-Bid Meeting

So, for those general contractors interested in bidding on the project, we highly recommend attending the pre-bid meeting on June 25th. You will have the chance to tour the facility and see what’s involved.