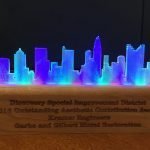 Last night Kramer Engineers attended an awards and recognition event held at the main branch of the Columbus Metropolitan Library.  Each year, the Discovery Special Improvement District recognizes community members who make a significant difference in the Downtown area.

This year Ralph Kramer accepted the 2016 Outstanding Aesthetic Contribution Award for the Garbo and Gilbert Mural Restoration that took place earlier in the year.  The award recognizes individuals who go beyond the norm to add special visual appeal to our City.  The Julian restoration project and addition of 250 S High Street were also among award recipients.

BREATHING LIFE INTO A FAMED MURAL

The black and white mural graces the west wall of the Kramer Engineers building at 394 Oak Street, downtown in the Discovery District.  It depicts the famous love scene between Garbo and Gilbert from the 1926 film Flesh and the Devil.

Although the scene has just come back to vivid life, the original wall painting was actually done in 1997. And the original artists?  Well, they were 4 members of the Columbus College of Arts and Design’s graduating class; Jason Cho, Tim Halterman, Keigo Kobayashi, and Andrew Myers.  But the 4 didn’t just create art; the wall is a Columbus Discovery District treasure and used as a backdrop for photography buffs from across the Nation.